First of all the venue looks amazing. As soon as you walking, the travel to far far away islands begins. Then the food, first of all it is pretty surprising expect snake, zebra, crocodile, bugs etc I visited the restaurant a few times and I would highly recommend the crocodile in vine leave or the zebra jerky, the alpaca picture below, absolutely mind blowing and of course the curry ice-cream.

You look around at the slightly chaotic mix-match decor Stick with it. I stared at this button-size towel for a while not knowing whether to eat it, smell it or just look at it. If you come here after dark, the atmosphere is even more magical with twinkling candles all around. 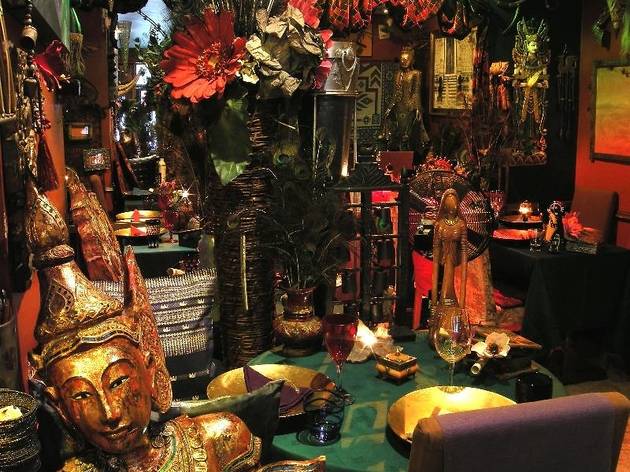 The food is, well, different. Think weird and wonderful. Think crazy foodie adventure. This was the craziest place I have ever been to!

I tried snake, zebra, kangaroo and also crocodile! For dessert I had caramelised worms! Great service too!

This is a place I have known of for years but never previously ventured into. Got a deal through Time Out which made a visit much more reasonable on the finances so finally popped along. Inside feels like you are stepping into the set of some exotic and slightly creepy teen horror story. All dark carved wood and gathered trinkets. Very good scene setting. The food is exotic indeed. We had crocodile wrapped in vine leaves, python carpaccio not to our liking , and zebra jerky tender and with a wonderful flavour - surprised and delighted to start followed by shredded alpaca alongside kangaroo skewers superb!

I was pleasantly surprised by many of the meats but for me that was a visit-once-and-now-I-am-done place so I have no plans to return. Would certainly be a talking point to take a first date though!

Great experience but you have to have brave tastebuds. We tried python and zebra, as well as bison. There were also ants on the menu, as well as a lot of other random things! I loved the jerky, and so did my partner. She really liked the python carpacchio but I wasn't as sure!

Most of the dishes in that meal had been delicious and so I was keen to try more exotic and unusual dishes. I had pondered over the menu all afternoon at work and decided that this was my opportunity to try a few interesting meats rather than go for the buggy dishes. We arrived and were instantly presented with our complementary included in the price glass of prosecco and we pretended to consider the menu we all knew what we wanted already!


There was a sweetness in this dish and I loved it. If we could have swapped these around and had a smaller skewer starter and a larger zebra main that would have been dreamy! For dessert I naturally leapt at the chance to order the chocolate souffle with white chocolate and CURRY ice-cream though I was slightly disappointed when it arrived - this was not a souffle, rather it was chocolate fondant without a runny middle.

It was delicious, but it was not a souffle. The ice-cream is super rich and indulgent- super creamy and very sweet and a little too sickly though I did scrape the plate clean but I struggled to taste the curry flavours. The service was really attentive and friendly, though the booking process was a little bit painful. Before they could confirm my booking I had to send each of our voucher numbers through and the security number and then you also need to print off the voucher and take it in when you fine I mean, ok but if you're getting the voucher when we dine, why do you need all the info before hand.

Coordinating my friends to go out to dinner together is hard enough without having to get all their voucher details before hand too! But hey, i'm being picky!

This is definitely a must-visit for those looking for a different type of cuisine in London. We sampled an assortment of crocodile, crickets, python, a baby bee, kangaroo, alpaca, bison, a sprinkling of silkworm and good old familiar lamb. We had the Ventoux red wine with dinner - which was really great. The interior of the restaurant was in itself pretty spectacular - they had everything from bird cages, to unusual furniture and even a Buddha statue - it was a real treasure trove of delights.

With the dim lighting and colourful mix of unusual pieces - this restaurant had an unforgettable ambience. The food was amazing. Some of our group were quite nervous about trying the non-conventional food items but the waiters were so helpful, and really gave us a good knowledge about where they source some their different more unusual food items from. The cocktails were delicious and I think all the food was so well-spiced and thoughtfully paired with accompaniments - I would almost recommend everything on the menu! The kangaroo skewers were amazing, I would go back just for them.

Visit our group bookings page or call for assistance. Room 1. Camden Camden is one of London's liveliest boroughs and the centre of the capital's underground music scene with a plethora of seductively scuzzy venues.

The locks along Regent's Canal are the focus for some London's most varied shopping, with fashion, antiques, music, arts, crafts and bric-a-brac filling this labyrinth of boutiques and markets. In the south of the borough lies picturesque Regent's Park famed for its wonderful open air theatre and London Zoo. For more intellectual pursuits, there is the British Library, whose million books, magazines CDs and DVDs are stored on km of shelves. Near Archipelago. Grant Museum of Zoology 3 minutes walk from Archipelago.

Soho, the gritty, colourful cousin to Mayfair, its well heeled neighbour, is continually captured on camera. The Photographers' Gallery celebrates Fifteen major Buddhist and Shinto sacred images go on display at the British Museum this autumn in a free display Playhouse Theatre. Part of a new season directed by Jamie Lloyd, which Wembley Park. A light installation from Nevada's Burning Man festival comes to London this winter as part Abigail's Bar is a secret '70s cocktail den with a retro living room design inspired The first bricks and mortar restaurant from fried chicken street food favourite Other Side Fried Catering to vegans who are craving something naughty, Temple of Seitan serves a menu of plant-based junk food A south London branch of the popular Rosa's A new venture from acclaimed chef Tom Aikens, Muse offers every guest a chefs' table Royal Albert Hall.